When enough is enough

As we roll into July, the level of chaos in my life is becoming more and more dynamic. Between the preparation for Youth Summer Camps, the ongoing teaching schedule and getting the chores like gutters repaired around my house and the joyful things like planning a vacation, I am exhausted. Not just a little tired. I am deeply tired. I come home on a beautiful sunny summer eve and do not want to move from my comfy reclining chair. I could go out and move that pile of dirt I have so I can put new sod down and repair my lawn. Or weed the garden or do an asana practice. I could even do a nidra - though even this vata girl falls asleep doing that these days. But I don't do any of that. I sit in a chair and try to relax so I can get up and do it all again tomorrow. 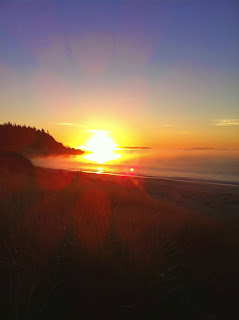 This morning as I reflected on what to write before I dash off to teach a private, before I head into staff training, I realized I am the one who is allowing this chaos. I said yes to the private. I said yes to my role in the staff training - albeit if I said no I may find myself unemployed. The point is that we do make choices in every moment about what our days, our weeks and our future will look like. This week a friend said, "I don't do the things I don't like to do." As I put the final shingles up on my porch addition and tackled the starlings nesting in my soffit, bird poop falling on me as I stood on a ladder pushing the soffit back, I thought... "I really don't want to do this."

I challenge you as you move through your busy summer to slow the chaos down and take a moment to appreciate the deep state of relaxation within yourself. As Panditji says in this article,"Relaxation is not merely the physical act of lying down. Something very profound is happening. Your body is being reunited with your breath and mind."

To read the whole article, click the link and have yourself a calm day.
Posted by Unknown No comments: 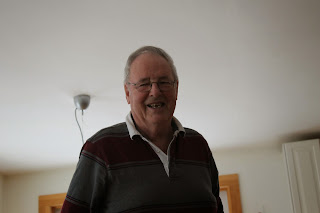 When I was a budding teenager, my father and I had an emerging relationship. No longer was he the man who bounced me on his knees or held me over the stair railing to watch my mother's anxiety climax. He became the man I wanted to be. Now as a woman, that may seem like a strange thing to say, but the masculine energy of my father was what I wanted to be. My dad was, and is, a commanding force; he was, and often is, in charge and we all knew it. It was this power that I wanted. My father believes that a twelve year old can certainly haul a bobsled covered with logs across the lake. He thinks it is natural for us as kids to fill a giant bucket with blueberries. He believes hard work was good for you. He believes that living with integrity and honesty are the only ways to live. That was what I wanted... that discipline; that integrity; that strength. My father has another strength I have come to truly admire... resiliency. As he supported and loved my mother through her illness and death, as he has stood by himself in the year that has followed, as he has allowed his love for his children to soften more and more, I see an amazing man who is still growing and thriving, embracing all life brings to him with gratitude.

Ironically, it is just such a man that I married and had a child with. A man who believed in having personal strength, probably still climbs 5.13 and can run a marathon. A man who believes in hard work being an essential part of ones day. A man who has incredible discipline and strength. I am no longer married to that man, but as I watch my son grow and become a man and who may one day be a father, I am very blessed. This summer his father will offer him many adventures, all encouraging my son to see himself as more capable than he believes himself to be. 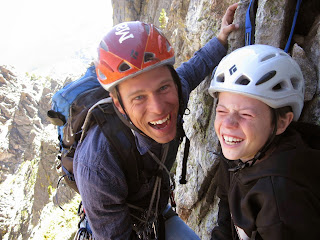 There are so many great fathers in my life; my teacher, my brother-in-laws, my friends... they are great in their desire to love, to be great. It is my hope that each day I will pause for a moment and think kindly of all of them, after all, I am so very fortunate to be in their lives. 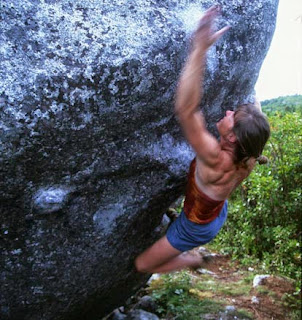 The attainment of goals is often steeped in the suffering of 'fear of not enough' with failure or 'what's next' with success. When success means happiness, the intention is not the goal itself, rather the path. The intention for peace and happiness is the goal of Yoga.
Posted by Unknown 2 comments:

The Fork in the Road

There are very often forks in the road of life. Most times they are small enough turns that we do not worry or think about them too much. Maybe I will go to a Yoga class, I have not been before and I hear it is very calming. And that slight shift in direction leads to even bigger forks in the roads. The big ones. Should I leave this partner and embark on my own? Should I leave my job and start fresh? Should I move across the country? 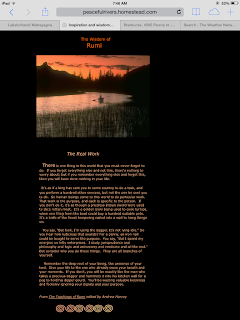 Those are the truly tough questions. Those are the big ones. The ones that the head will usually win the argument until the pain of staying the same is just too great. Or until faith comes that in the end, no matter what happens, even in the face of failure, we can believe that we will be okay. Of course we will, we will always be okay. We all came into this world with nothing and it is exactly how we leave it. The path may just maybe a little uncomfortable in the new surroundings you find yourself. Discomfort is part of what will make it that much more rewarding in the end.

Follow your dreams, not the rules. Live your truth, not someone else's. Love like there is not tomorrow, it's all that really counts.
Posted by Unknown No comments:

That is a perspective. As a human, I struggle sometimes to see the goodness -- to experience ziva. This is my exploration.